“Looking for a unique holiday gift this year for Mom or Dad? Why not restore that old tube radio that’s been sitting in your home but hasn’t played in years? Wouldn’t it be nice to listen to your favorite Holiday Carols on Grandpa’s old tube radio? Regal Sound Design, LLC takes great pride in repairing tube audio equipment including radios, amplifiers, preamps, integrated tube amps, tuners, receivers and more. We provide fast, reliable service-why not give us a call and bring tears of joy to someones eyes this holiday season. Call Ben Bensaid at (262)-581-5453 or visit our website-www.RegalSoundDesign.com. Trust me-we’re better than another tie or bottle of perfume.”

Looking for battery pack for Zenith 1000D. Thanks. 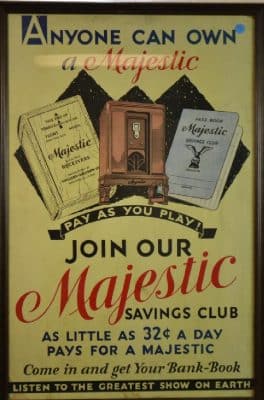 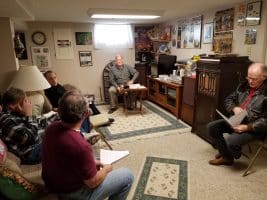 Minutes of the last meeting had been published on the club website, no corrections were offered.

Treasurer was unable to attend.

Auction Update: President Dave reported on the upcoming April 28th Radio Auction (details available elsewhere on the website). Direct mail advertising of over 200 postcards has gone out. Social media including our website, mailchimp notices to our members, multiple Facebook groups, and Craigslist is arranged. The auctioneer usually places the Cedar Rapids Gazette notices. Members are advised to obtain a lot number and send their photos to the auction coordinator early.  Club volunteer manpower is needed, please contact Dave Perkins or Craig Huseboe. News for next years auction: Craig Huseboe has asked to resign as auction coordinator (our thanks to Craig for many years of service) and this role needs to be filled. We will return to the 1st Saturday in May as auction day in 2019.

Meeting adjourned and we enjoyed the usual pizza  for lunch. We toured Jerry’s vintage radio collection / ham radio room, which had many restored and operating vintage radios, mid 1930’s – 1950 era.

Amongst his collection was a 1940 RCA VICTOR RADIOS red neon sign, 1948 restored Sentinel 7″ (7JP4 – CRT) TV, model TV400, 3 – Wards, Airline restored film dial radio, a rare operating 1948 Robert Lawrence coin radio, a rare Stewart Warner “Smokerette” radio, and a Stewart Warner “Porto Baradio” – both circa 1948. Jerry demonstrated his 1919 Edison model C-19 phonograph, with the Edison record – “The Iowa Corn Song” from 1920. Jerry showed us several early Edison Diamond Disc records and explained the differences in the early record formats. He also has a large collection of unique 78 records, mainly pre 1925 era, including one of the first Berliner 7″ records from “1899″. On the project bench was a 1927 Trav-ler model – T-34746, AC/DC portable radio. Jerry worked about 30+ years in broadcast radio and TV, having spent 22 years at WQAD-TV in Moline. After the meeting, we drove to Moline to tour Bruce Sorensen’s terrific golden era console radio collection which appears in another post.

Club members and guests at the 3/31/18 IARCHS meeting in Davenport  were invited to visit Bruce Sorensen at his home to see his collection of classic console radios. Bruce has assembled what may be the finest collection of the 1930s “Golden Era” EH Scott and McMurdo Silver radios. I will let the photos, placards and captions do most of the talking. While Bruce’s main interest is Scott and McMurdo, there are a smattering of other top of the line radios and custom cabinets. Zenith is conspicuous by its absence. Most of the radios have been restored and many were playing at the visit utilizing his SST AM transmitter. Chassis restoration has been done by experienced restorers. According to Bruce, finding original cabinets is the hardest part. Bruce sends the cabinets out of state to experts experienced in bringing the cabinets back to factory finish condition. Step down transformers are used to keep the radios protected from modern AC voltages which often runs over 120V. Voltage is reduced to 105V which helps protect radios designed to run at the old AC 110V level. The search for these uncommon high end radios has run far and wide. According to Bruce, trading in this segment is subject to some frustration as it not unusual to lose contact with buyers, sellers, and repair people for long periods. It was a pleasure to see and hear these wonderful radios.

Bruce Sorensen:  “I started collecting radios in 2004 when I retired and I seldom watch TV but always have been a radio listener as far back as I can remember.

Since then I have gravitated more to the high end 10+ tube 1930’s consoles. I am a collector not a restorer, so I focused on EH Scott consoles and at one time had 35 in my collection.

Lately I have focused more on the ultra rare McMurdo Silver Masterpiece series and currently have the entire run of all 7 versions offered.
(including both of the 1st year Masterpieces, chromed and brass plated)

I am downsizing some of my collection so others can also enjoy listening to these old classics.

If only our radios could talk and tell us what they have seen and heard what a story that would be.”

I have some extra copies of these Iowa Antique Radio History tapes available. I would like to have $19.95 + $4 shipping and handling for any of them. email me if interested and I can send you a PayPal invoice for your specific choice if it is still available.

For more info call Frank Prince 262-639-9307.
FOR SALE: Grandfather clock radio, serviced and working great. Radio can be viewed on YouTube here: https://youtu.be/Y1RTGBiCl-s  If interested, make an offer.  Call Frank Prince 262-639-9307.
FOR SALE: Orola wind-up phonograph. Located in Mount Pleasant, WI. The phonograph was made by General Mfg. Corp in Milwaukee, WI in the 1920s. Has nameplate that says “With a tone as rich as gold.” Looking for best offer. If you’re interested in the item, call Ben at 262-412-9112 or Mike Piering at (262)344-3302.
FOR SALE: 1938 Zenith 9-S-262 Shutterdial console radio. The radio has been recapped and restored electrically. The chassis is clean. The cabinet has been partially refinished and has all of its original knobs. $700 invested, asking $725. Located in Mount Pleasant, WI. For more information, contact Ben at (262)412-9112 or Mike Piering at (262)344-3302.
FOR SALE: Zenith Walton 7-S-232
– Replaced all electrolytic and paper capacitors.
– Replaced about 1/4 of the resistors, including the 1Meg in the eye tube socket.
– Replace the speaker wires.
– Cleaned and greased the shutter mechanism. Replaces the felt pads in the mechanism as well.
– Replaced the rubber around the edge of the dial glass.
– Replaced the rubber chassis mounts
– Replaced wrong grille cloth with reproduction.
-Case was restored by Guaranteed Furniture Repair in Berkley, MI. Polyurethane finish was stripped. Toning was restored around the grille. It was coated with satin finish nitrocellulose lacquer.
– Painted the interior with black nitrocellulose lacquer.
– $3200.  Call Frank at 262-639-9307.  For video Click Here
FOR SALE: 1937 Philco 37-116X console radio.  Restored, asking $275.  For video Click Here
For more info call Frank Prince 262-639-9307
WANTED: RCA 110K or 111K console radio, also interested in 1970’s LED watches.  Call Frank Prince 262-639-9307

The tentative date for the 2018 auction is April 28th, stay tuned for further information.

(Click on any picture to see a larger view)