President Dave Perkins brought the meeting to order at 10AM at  Jerry Lange’s home in Dubuque, IA. 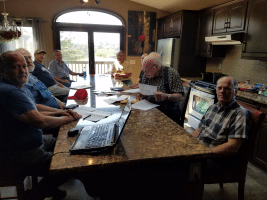 Treasurer’s report: Total balance of $4137 in our checking and saving accounts

Old Business: The next annual radio auction is set for Saturday April 28th 2018 with radio check in on the 26th and 27th. Same location and format: Hawkeye Downs auction arena, Cedar Rapids, IA, Wears Auctioneering will conduct the auction again. as we approach the auction the usual planning and volunteer requests will be made.

New Business: Webmaster David Fitkin explained the need for an “https” secure website certification to make our website safe to use and encourage more “hits.” The charge is $50/year. Moved, seconded, adopted by consensus.

Newer member Dave Stewart asked about finding repair people. This is a continual challenge for the club. Anyone willing to repair old radios is asked to contact us and be listed on the Repair Service web page. Many repairs are arranged informally.

Having an announced repair topic coverage at the meetings was discussed but is challenging due to the many different levels of skill by attendees. Listing some “YouTube” links (to good instruction videos) on our website will be offered as a partial solution.

Next Meeting is tentatively January 13th or 20th, 2018. A host volunteer is sought. Please contact Dave Perkins to volunteer.

Adjournment to lunch and the repair session 11AM

John O’Briant had brought up a Zenith Walton chassis and speaker. He says it was a great auction buy but had been dropped at the auction. Candohm resistor failure was part of the diagnosis. Jerry Rappel had the Airline bakelight case radio which needed to begin with the basics of tube testing and electrolytic capacitor replacement.